There are three bodies with management responsibility in our village.

The Manager (company), through its on-site manager takes care of the day-to-day running of the village's staff and facilities (see Deed 3.3 & 4). They have no resident guardianship role. The staff are employees of, and answerable to, the Manager and not to residents.

The Advisory Board provides direction to Residents and the Manager on the running of the village (see Deed 3.7a).

The Residents' Committee appoints a number of subcommittees to deal with particular activities. Currently these are Finance, Gardening, Newsletter/Website, Social, Works and Librarians. These appointments are necessary to legally authorise any discussions they may need to have with management on behalf of residents (see The Code 6.2). 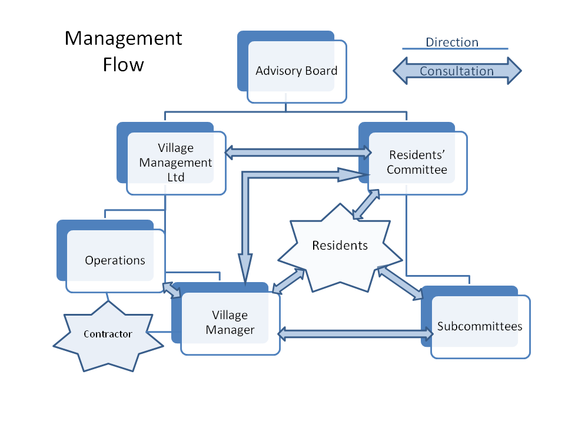 How we are managed

The "Village Scheme and Residency Deed" (generally shortened to "the Deed") governs how the village is managed.

Each resident is obligated to abide by the terms of the Deed, which is their contract with other residents, The Manager and The Developer. You need to be conversant with the terms of our Deed.

In practice, the Residents' Committee meets generally on the second Monday of each month and will include a management representative. Together they discuss all matters and each other's position is known before ideas are put to a residents general meeting. However, subsequent information or events may still cause their representatives to change their position when a matter goes to the Advisory Board. In some instances the Advisory Board may ask a residents meeting to vote for a matter before it is implemented. If the vote is negative the matter may either be dropped or reconsidered by the Advisory Board or The Manager; this could arise in regard to passing the Budget or an amendment to the Deed.

Members of committees and subcommittees are all volunteers. All residents should consider participating on one or more of our committees to share the load. Being on a committee enables you to understand how your village works. Rather than wondering why something is happening contrary to what you expect, you get the opportunity to understand the issues better and influence how a matter is resolved. You won't be told to do anything, instead you are expected to offer to take on roles within your committee so one or two don't end up doing all the work.

Disputes can arise between residents or between them and a management body.

When residents have a problem they should initially take it to the on-site manager and attempt to resolve the matter. If that proves unsatisfactory, the matter may be raised with the Residents' Committee who after consideration may make further representations to either The Manager or the Advisory Board as thought appropriate.

If the matter remains unresolved the resident may raise the matter to the level of a formal dispute and progress it under clause 13 of the Deed. A 'Disputes Committee' may then either hear it or declare it beyond its competence. If the latter, or the matter is heard but still not resolved, it may be referred to the State Administrative Tribunal (SAT) for a decision.